Andrew Yang is not your stereotypical presidential candidate. The 44 year old entrepreneur is running with perhaps the most progressive policy in this race, a universal basic income (UBI), termed the Freedom Dividend by Yang himself. This is in response to current and future jobs being lost to automation. Yang proposes a $1000 a month stipend for every American over the age of 18 as a fallback mechanism, especially when millions of potential jobs will be gone forever. He’s also part of a historic trend of Asian Americans running for public office. Himself, Kamala Harris, and Tulsi Gabbard are the three candidates with Asian heritage running for president this election cycle. But what else differentiates Yang from the rest of the pack?

Yang is still a longshot to become the Democratic Nominee. The latest RealClearPolitics average places him as the eleventh most popular candidate in the crowded field of Democrats. However, Yang still has a dedicated internet following - YangGang - and they seem to be flooding the Youtube comments of every video containing Mr. Yang. Most of his fans point to his outsider status as well as his long list of policies as reasons for their support for him. Yang has over a list of over 100 detailed policies on his campaign website and they range from quantum computing standards to reducing smartphone caused harm on children. Similar to Elizabeth Warren, Andrew Yang has a plan for almost everything.

What is the Freedom Dividend?

As mentioned earlier, the freedom dividend is a policy that proposes that every American citizen above the age of 18 should get $1,000 per month, no questions asked. It’s primary goal is to fight the advancement of automation, which is projected to take away over 30 million US jobs. However, Yang claims many secondary benefits as well. Ranging from ending poverty to giving those in abusive relationships the means to leave their partners, a UBI could be beneficial in every aspect of life. The policy has faced some criticism, especially in regards to a paying mechanism. A program of the aforementioned specifications could cost as much as $3.2 trillion a year. Yang presents a Value Added Tax (VAT) to pay for such a program. A VAT would close loopholes that allow corporations such as Amazon to pay 0% in taxes, thus raking in significant revenue for the government. However, this would only amount to around 25% of the program’s cost. Yang claims that a UBI would stimulate further economic growth by allowing citizens to have more spending power, permitting the government to cover the rest of the costs. While programs like these have worked overseas, it remains to be seen whether or not this would work throughout the United States.

How did he do at the Democratic Debates?

Heading into the debates, much of the left-leaning non mainstream media framed Andrew Yang as a potential winner from the debates. He would gain attention among a national audience, which could only be a win-win at this stage in his campaign, and much more importantly, Yang had experience on the 1992 US National Team at the World School Debating Championships held in London, England. However, Yang’s performance at the debates left much to be desired. While he directly answered the questions asked of him, it also appeared that he lacked the charisma displayed by other candidates. Even more odd, Yang only spoke for 2 minutes and 56 seconds of the entire debate, whereas frontrunner Joe Biden spoke for 13 minutes and 19 seconds. His speaking time was the least of any candidates on the stage either night of the debates. Yang has since blamed his lack of speaking time on NBC cutting off his mic at certain points throughout the debate, and his YangGang started the #LetYangSpeak movement the day after the debates. NBC has since denied these allegations. Both sides have moved forward from this as the next debates aren’t hosted by NBC. 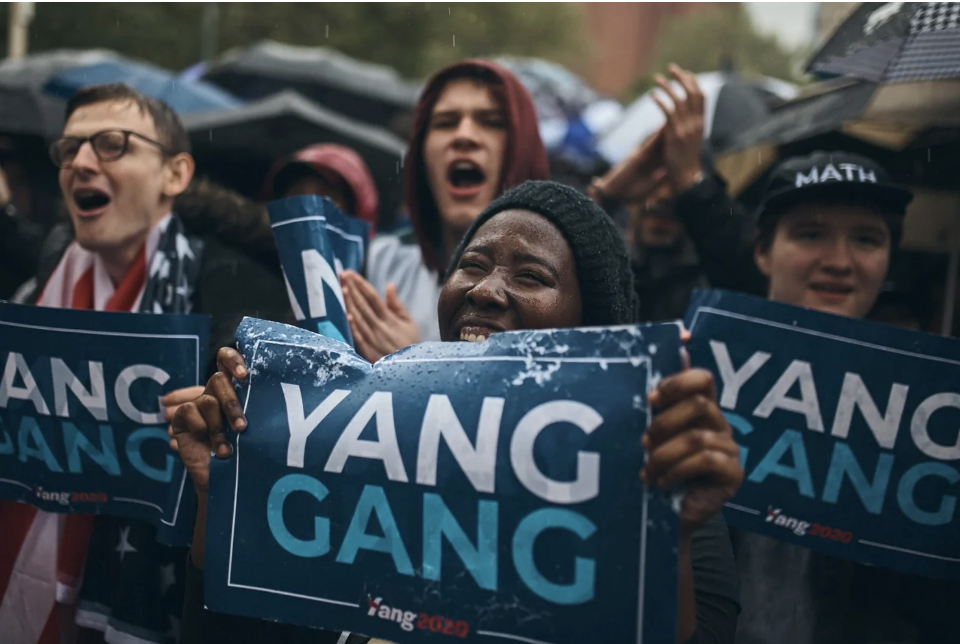 Supporters cheer at the rally in New York in May. (Photo by Andres Kudacki for The Washington Post)

Man of the People

Regardless, Yang’s support has persisted. Andrew Yang is simply a different candidate. On the campaign trail he continues to tackle all issues. Case in point, Yang recently tweeted about NBA free agency, mentioning fellow Asian American Jeremy Lin’s struggle to find a team. Contrary to career politicians, Yang accepts himself for who he is - a normal person. However, Yang is a normal person in a historic run of Asian Americans seeking public office. This can only be a good thing for representation. Perhaps he’ll end up being the President of the United States. Perhaps he’ll end up dropping out like Eric Swallwell. Perhaps he’ll have Asian Americans more engaged in politics than ever before. For now, we’ll just have to wait and see.

The Good, The Gaffes, and a General Election: The AAPI Vote for Trump and Biden

Dem Debates Round 6: The Dauntless and the Defeated

Dem Debates Round 5: Dull and Dazed?