Hindutva: Blasphemy or a Blessing?

Hindutva is the political ideology of Narendra Modi, who is a member of the Bharatiya Janata Party (BJP). Hindutva promotes Hindu nationalism in India, and the BJP has adopted Hindutva as its ideology since 1989, but it has retracted from the original term “Hindutva,” coined by Vinayak Damodar Savarkar in 1923. This article will examine how Hindutva has changed in the past century and the effects this change has had on the different faiths and people that occupy India.

Narendra Modi is a man who has been making headlines in recent months, not for his shining contributions to India, but rather for accusations of genocide and his push for a Hindu nationalistic policy known as Hindutva. With the repeal of Article 370 and the backing of United States President Donald Trump, Modi has been attempting to push into Kashmir and stop Pakistani control, but at what cost? Muslims in the region, a startling majority compared to the number of Hindus, are fighting against Modi’s blatant Islamophobia and are taking a stand for a Kashmir undiluted by Modi’s beliefs. A Kashmir where, above all else, they are free to have their Constitution back, something that was banished with the repeal of the Article. 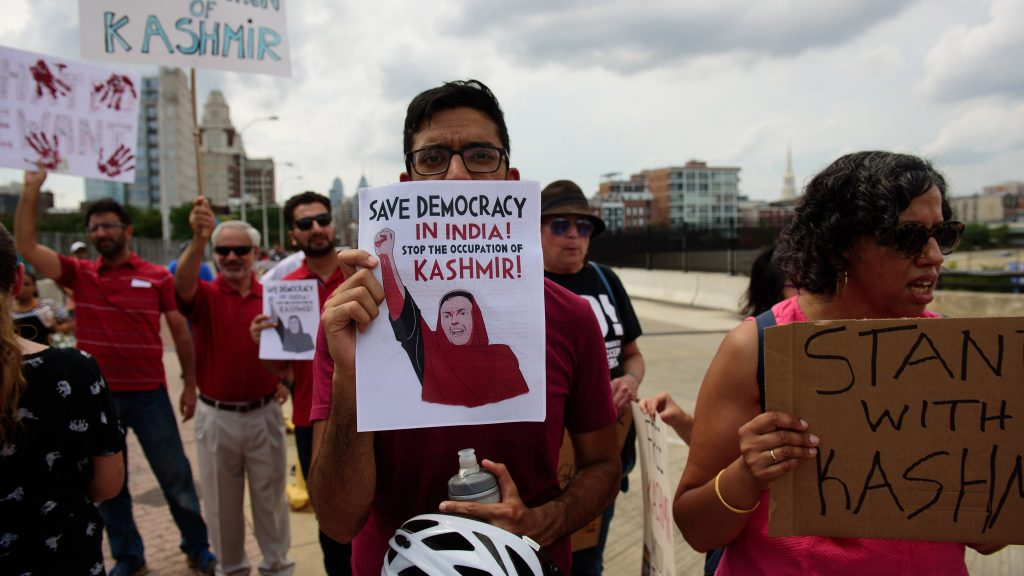 But the Kashmir crisis is only one example of the effects Hindutva has had on India and its surrounding nations. Roils of panic are crashing throughout the Indian subcontinent, and a serious question needs to be raised: Is Hindutva having a negative effect on the democratic and inclusive ideals of the nation?

Gandhi’s Ideals and the BJP

When Mahatma Gandhi led the revolution and freed India in 1947, he had a dream for an India that was inclusive of everyone. After the British suppressed Indians for years, he pushed for democracy and the inclusion of all faiths. Now people worry that the Bharatiya Janata Party (BJP) threatens these principles, while others believe Hindutva is saving them. They hope that the BJP pushes India back into its old traditionalist ways. So which side is right? It remains inconclusive.

Millions of Hindus supporting the BJP have fought back against accusations of genocide and defended their Prime Minister. Rarely does the news show both sides of the conflict, and herein lies the conflict. It becomes clearer and clearer that not only is Kashmir a turning point in this religious warfare, but it exposes generations of the Hindu-Muslim war, with neither bearing an inch to the other and taking a step to look at the bigger picture.

It would be impossible to unravel thousands of years of genocide on both sides of the battle. It is more beneficial to take a closer look at the present-day representation of Hindu nationalism, pioneered by Prime Minister Modi and his party, the BJP.

The Origins of Hindutva

Hindutva is nothing new to India, and was first written about in the book Hindutva: Who Is a Hindu? by Vinayak Damodar Savarkar in 1923. It was published when India was still under the rule of the British, but close to a century later, it makes headlines today as the type of Hindu nationalism Narendra Modi supports. But Hindus today question what exactly Modi’s Hindutva fights for, and how it compares to the Hindutva Savarkar engineered a century ago.

To put it simply, Hindutva fights for cultural homogeneity in India. It fights for the expression of Hinduism and the religious adherence to it. But perhaps in pushing for a Hinduist nation, it has had the opposite effect on the other faiths that call India their home.

Since Modi took office in 2014, Muslim representation has been the lowest it has been in the last fifty years. There has also been evidence of killings of Muslims who slaughter cows, as the slaughtering of cows is against the Hindu religion. Muslims are being more oppressed than ever, evident in both India and now the new policies in Kashmir, and that raises the central question in this article: is this Hindutva’s fault? 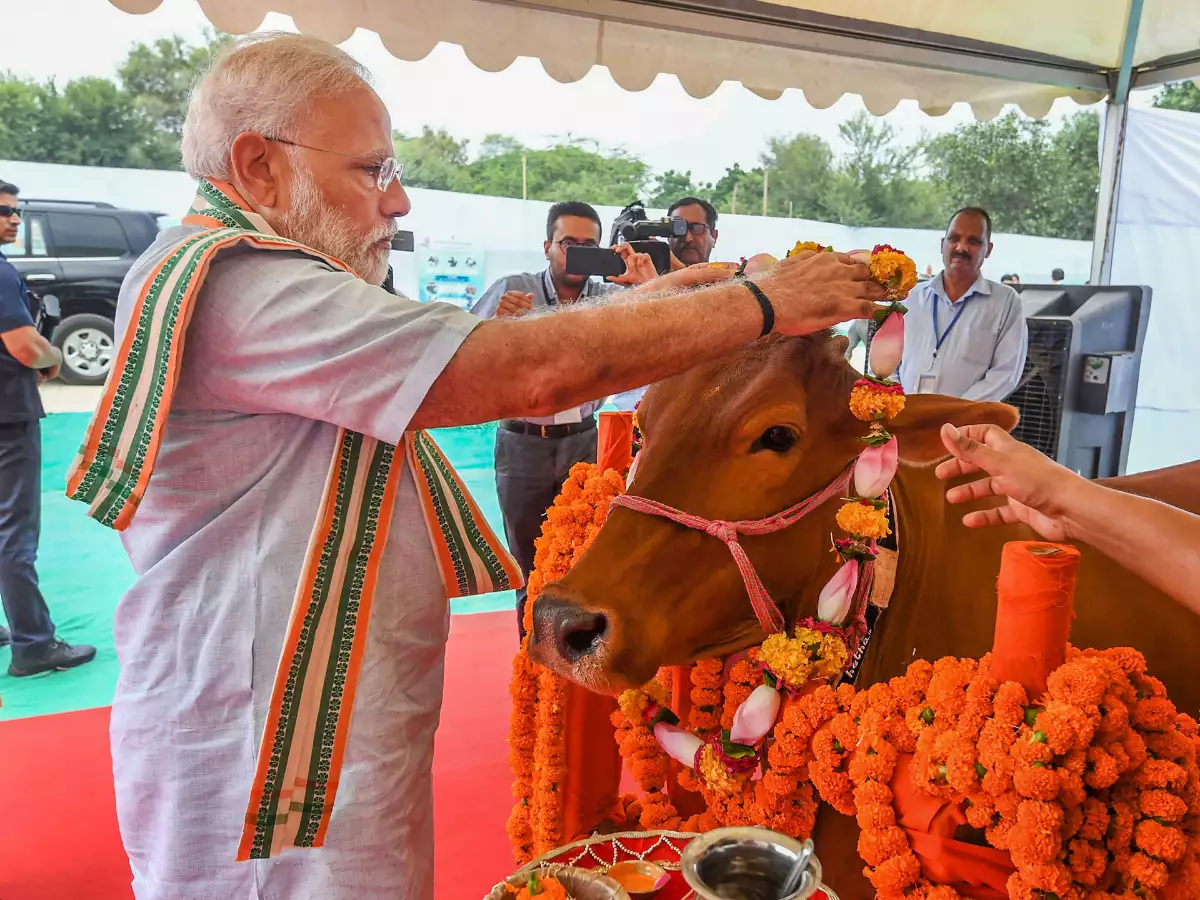 Narendra Modi paying respect to a cow, a sacred animal in the Hindu religion. Omar Rashid/PIB/AFP.

But before we can truly answer this question, it is important to go straight to the roots of what Savarkar attempted to achieve by coining the term Hindutva. As an atheist and proponent of science, Savarkar himself never meant to connect Hindutva to Hinduism, but instead to have Hindutva as a national identity, to combine all cultures and faiths into one India. Modi, however, seems to have a different approach. Rather than it being about who Indians are as a people and a nation, it is a means to expand Hinduism to all areas of India, and as such, these negative effects have been seen across the sub-continent.

The Changing Tide of Hindutva

These days, the political agenda of Modi includes running on the support from Hindus who want India to go back to its so-called “traditional” ways. Though Savarkar saw Hindutva as a way to bring different castes and economic backgrounds together, in practice, we can see that this effect did not take hold. Most people in India are not accepting of Muslims, as characterized by the lynchings and violence and perhaps, based on the centuries-long history between the two faiths, they never will be. But perhaps Hindutva also provides consolidation to the millions living in poverty in India, as Savarkar wanted. However, this does not detract from the ill effects Hindutva has had on the nation, and it can not be glossed over.

Hindutva insists that India is a Hindu nation, and this effectively undermines all the minority faiths that live in India and encourage violence against them. Whether Modi condones this is unknown, but his election in 2015 undoubtedly appropriated these harsh effects.

Consolation can be found, however, in the fact that not all Hindus will agree with the extremist views proposed by the BJP, and will stick strongly to the ideals of Gandhi that they should be accepting of a diverse nation.

One thing is clear. In an interview in 2012 in Japan, Modi was questioned if he was “anti-Muslim,” and replied by saying, “God is one. We don't say that [the] Hindus' god is separate, Muslim god is separate, Christian god is separate. This is not our philosophy. We believe [the saying] vasudhaiva kutumbakam: ‘whole world is family.’ This is in our DNA. This is in our genetic system. I belong to a culture which culture says ‘the whole world is one family.’ How can we hate any community? Even any person? It's impossible!”

Whatever Modi claims seems insignificant as we watch the ill-effects of his ideology take root. While the events in Kashmir and in India itself speak differently about what Modi claims, we cannot put the blame solely on Modi, but rather on Hindutva itself and the claims it asserts upon people. It tells people that there is only one true religion, and far from uniting India, it might just break the country apart

The Good, The Gaffes, and a General Election: The AAPI Vote for Trump and Biden

This Asian American Candidate and his Unprecedented Campaign

Dem Debates Round 6: The Dauntless and the Defeated